Racing Vespas in the Mexican 1000 sounds like peak fun


Racing rallies is an exercise of determination, grit, and toughness, and that’s when driving something like a trophy truck, an off-road motorcycle, or an ATV. Tutto Mondo Racing (TMR) apparently felt bored by the exercise and has come up with a new way to challenge its drivers and engineers. For the 2020 Yokohama NORRA Mexican 1000, TMR will set out into the wilderness on Vespas. Yep, the scooters.

By its own volition, TMR significantly increased the level of difficulty for the upcoming Mexican 1000 rally by registering to drive kitted-out Vespas. The National Off-Road Racing Association (NORRA) doesn’t find it too odd, though, as Vespas have significant followings at racing events in other countries around the world. Plus, Vespas previously raced in the Mexican 1000 in the ’70s.

The idea started when TMR invited Italian colleagues Leonardo Pilati, and Pietro Bologna to join the Mexican 1000. According to NORRA (via RideApart), Bologna is the Sports Director of the Vespa Club of Italy, and Pilati has won various types of Vespa races in Europe. The two agreed to participate if they could use Vespas, TMR was into the idea, and a plan was hatched. They join Marcus Benham, Phillip Benham, Rob Mezzetti, and the Tutto Mondo team. 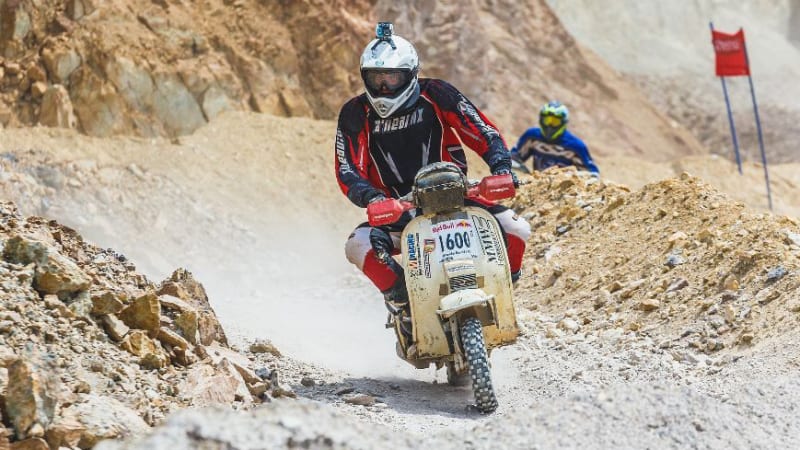 The Vespas have several modifications to prep them for the brutal beating they’re about to take. They have larger knobby tires, skid plates, and better shocks. And that’s pretty much it. There’s not a whole lot that can be done to a scooter, which TMR says offers an extremely cheap and budget-friendly way to participate in racing.

The Mexican 1000, joyfully touted as “The Happiest Race On Earth,” is kinda similar to the Baja 1000. The race takes place on the Baja California Peninsula in Mexico. It starts in Ensenada, Mexico on April 17, 2020, and ends in San Jose Del Cabo on April 24, 2020. Entries include a variety of vehicles from various eras, starting in the ’60s. For more information about the schedule and the race, visit NORRA.